Fighting for Mental Health Awareness & Democracy: What to Watch in July 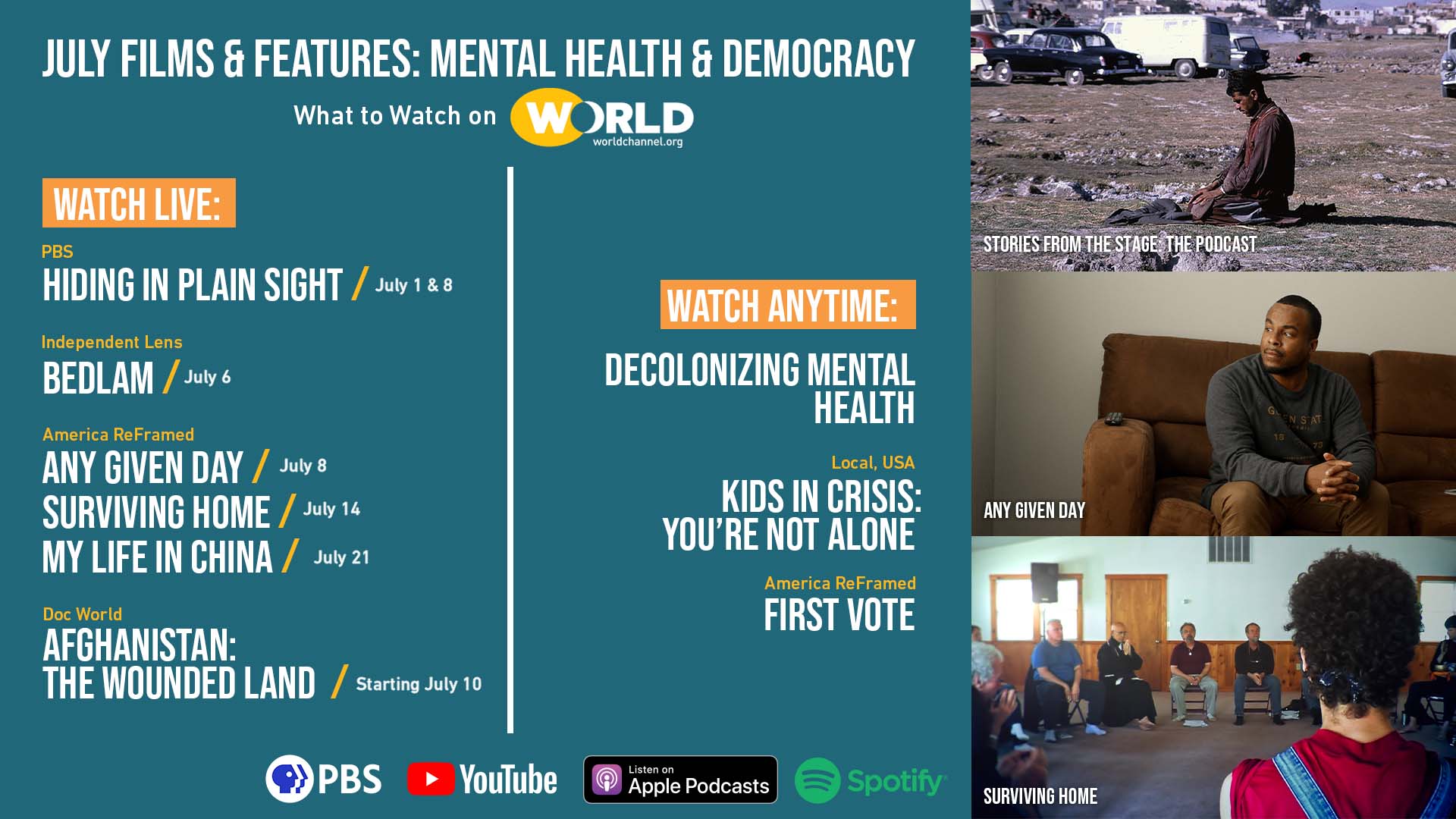 Among the countless systemic issues in the United States exacerbated by the COVID-19 pandemic, mental health and well-being have been at the top of the list. And with that, the glaring lack of awareness and resources has shifted into focus for Americans. While initiatives are being created across the country to address current conditions and help those who are struggling, the U.S. continues to face a crisis that disproportionately affects communities of color, LGBTQIA+ youth and other underrepresented voices. As societal norms and enduring shame continue to stigmatize treatment, it is more crucial now than ever to highlight mental health needs.

For people throughout the U.S. like refugees who have fled persecution for being who they are, families dealing with grief after the loss of a child to gun violence or members of the LBGTQIA+ and AAPI communities who face stereotypes and hate in their daily lives, change must happen in order for there to be healing. During BIPOC Mental Health Awareness Month this July, WORLD Channel showcases the many stories of mental health as captured in eye-opening films such as Any Given Day, following three Chicagoans as they navigate their own unique situations within a mental health probation program, and the two-part Hiding in Plain Sight: Youth Mental Illness, exploring the mental health obstacles that affect young Americans.

This month, ahead of the November Midterms and as the U.S. marks Independence Day during primary election season, WORLD also turns its attention to democracy and the global fight to save it. In a new four-part series, Afghanistan: The Wounded Land explores representation, equity and sovereignty through the never-ending war which has plagued the country for decades.

Watch films and features this July that advocate for the fight for mental health awareness and freedom around the world while looking forward to a more open-minded, just and promising future.

Hiding in Plain Sight: Youth Mental Illness
July 1 and 8 on TV, online & on the PBS app

Follow the journeys of more than 20 young Americans from all over the country and all walks of life, who have struggled with thoughts and feelings that have troubled and, at times, overwhelmed them. This series presents an unstinting look at both the seemingly insurmountable obstacles faced by those who live with mental disorders and the hope that many have found after that storm.

Like other healthcare industrial complexes, the mental health field operates around a center defined by a whiteness of theory and practice. It’s a colonization that has rarely ever been questioned. Through 20 profiles, the digital series dismantles the racism that underscores the mental healthcare industry and discusses what a more responsive mental health care system should look like. By focusing its gaze on the transformative work of therapists and individuals of color, it calls for a redressal of the ways in which we define psychiatric illness and health.

Shot over the course of five years, the film examines the mental health crisis through intimate stories of those people who are in and out of overwhelmed and under-resourced psych emergency rooms, jails and homeless camps in Los Angeles, while psychiatrist and filmmaker Kenneth Paul Rosenberg, M.D. also searches for answers to his own late sister’s mental illness.

Any Given Day | America ReFramed
July 7 on TV, online & on the PBS app

Filmmaker Margaret Byrne follows three formerly incarcerated Chicagoans as they manage their respective mental illnesses while searching for stability in their families, friendships, jobs and housing. While documenting the challenges that are faced at the intersections of a punitive carceral system, poverty and substance use, Byrne reckons with her own history of mental illness.

Mysteries of Mental Illness
Available online & on the PBS app

Exploring the story of mental illness in science and society, this four-part series traces the evolution of this complex topic from its earliest days to present times, following dramatic attempts across generations to unravel the mysteries of mental illness and giving voice to contemporary Americans across a spectrum of experiences.

Over 20 million U.S. military veterans have put their lives on the line in service to their country. But for many, surviving war is just the beginning. Watch as this film uncovers a detrimental gap between military veterans and the civilian populace they protected, while also exposing a culture of silence that prevents many of them from talking about their experiences in war.

While Asian Americans have faced a double pandemic of COVID-19 and anti-Asian racism, the rise of solidarity efforts within Asian American and other BIPOC communities gives us moments of joy, resilience and hope as we rebuild our lives. Seven documentary shorts move beyond the pandemic and reflect the complexities of Asian American experiences in this critical moment.

Three young adults with intellectual disabilities – Micah, Naieer and Naomie – work toward a future marked with increased inclusion and independence with the support of family, educators and colleagues. Their lives challenge staid notions of intelligence as they navigate high school, college and the workforce. Narrated by Academy Award-winning actor Chris Cooper.

The mental health journeys of four young people, told entirely in their own words. Each share their story to let others know they’re not alone and that healing is possible. They have endured assault, bullying and discrimination...some thought about suicide. Through the pain, they found support. They now look towards the future with optimism and encourage kids to seek support and community.

Each September, the town of Chemult, Oregon is flooded with mushroom hunters. Many are immigrants from Laos, Cambodia and Thailand who entered the U.S. as refugees in the 1980s. Here, veterans Kouy Loch and Roger Higgins find more than just the rare matsutake in the woods; they create a familial bond and a means to slowly heal the wounds of war.

Follow Tariq Ali into the world of Rubik’s cube competitions. His progress as a speedcuber mirrors his journey growing up – Tariq comes to terms with a family tragedy and his multiracial identity as a Muslim American in a country where hate crimes are on the rise. In the midst of it all, Tariq says “I just love cubing so much...I come to the competitions and I feel like I leave a better person."

Featuring interviews from across the political spectrum, the three-part series examines democratic structures of government in the United States and around the world and depicts the gradual deterioration of the democratic process. Are we up to the pressing task of preserving democracy?

In the 1960s, Afghanistan opened to the world but was at a crossroads. And when communists seized power, a never-ending war began. The four-part series looks at six decades of Afghan history through the eyes of those who were there, opening new perspectives into the country, people and destiny. The documentary also grants insight into what went wrong in the past and what future is being hoped for.

With unparalleled access to a diverse cross-section of politically-engaged Chinese Americans, this character-driven verité look at electoral organizing in North Carolina and Ohio weaves their stories from the presidential election of 2016 to the 2018 midterms, and explores the intersections between immigration, voting rights and racial justice.

Follow the pursuit of democracy from the Revolutionary War through recurring cycles of civil rights progress and backlash, the 2021 Capitol riot and beyond. Explore the impact of voter rights and a civics curriculum on engaged and informed citizens.

Three communities intersect, sharing histories of forced removal – Japanese Americans who were incarcerated at the Manzanar WWII concentration camp, Native Americans who were forced from these lands and ranchers-turned-environmentalists who were bought out by the LA Department of Water and Power. How do they come together in the present moment to defend their land and water from Los Angeles?

My Life in China | America ReFramed
July 21 on TV, online & on the PBS app

In an unvarnished portrait of the life and memories of a stoic and reticent man committed to his family, filmmaker Kenneth Eng retraces the perilous steps his father chanced in search of a better life. Exploring the themes of home, exile and belonging, the film is a story about promise, purpose and living life without regrets.

In July, BIPOC Mental Health Awareness Month brings forth a necessary consciousness of what is being done and what more can be done for all communities of color who have historically been left out of the mental healthcare system. WORLD Channel showcases stories of mental health with last year’s digital series Decolonizing Mental Health and the new America ReFramed film Any Given Day.

Article Prioritizing Your Wellness: Where to Find Mental Health Support, Treatment and More

No matter who you are, how you identify or what you believe in, there is a resource available to help. If you or a loved one is struggling, seek support at one of these organizations.

Article Finding Help and Healing Amid Grief: Resources and Support

The scope of violence has no limits, and the effects of trauma, and the burden it places, ripple far beyond what can be managed on our own. WORLD Channel offers resources to support the individuals, families and communities across the country coping with grief while searching for hope and healing. If you or a loved one is looking for support, help is out there.

Through a series of four films narrated by "The Kite Runner" author Khaled Hosseini, Afghanistan: The Wounded Land creates an opportunity to learn about Afghanistan’s history, understand the struggles of others who are not unlike ourselves, and build a more peaceful and prosperous global future.

Article 'Facing the Dragon' Filmmaker Speaks on Taliban Takeover in Afghanistan, Women's Rights and the Role of the West

'Facing the Dragon' filmmaker Sedika Mojadidi speaks to how the two women featured in the film are faring in 2021 as the Taliban takes control over Afghanistan once again.

Beyond the Lens with 'Facing the Dragon' Filmmaker Sedika Mojadidi

To inform and inspire with real stories from around the world.

Article Experience Stories from the Stage: The Podcast

Liz Cheng and Patricia Alvarado Núñez, co-executive producers and co-hosts of Stories from the Stage: The Podcast, discuss upcoming new episodes of the show.