What to Watch on WORLD: July Films and Features 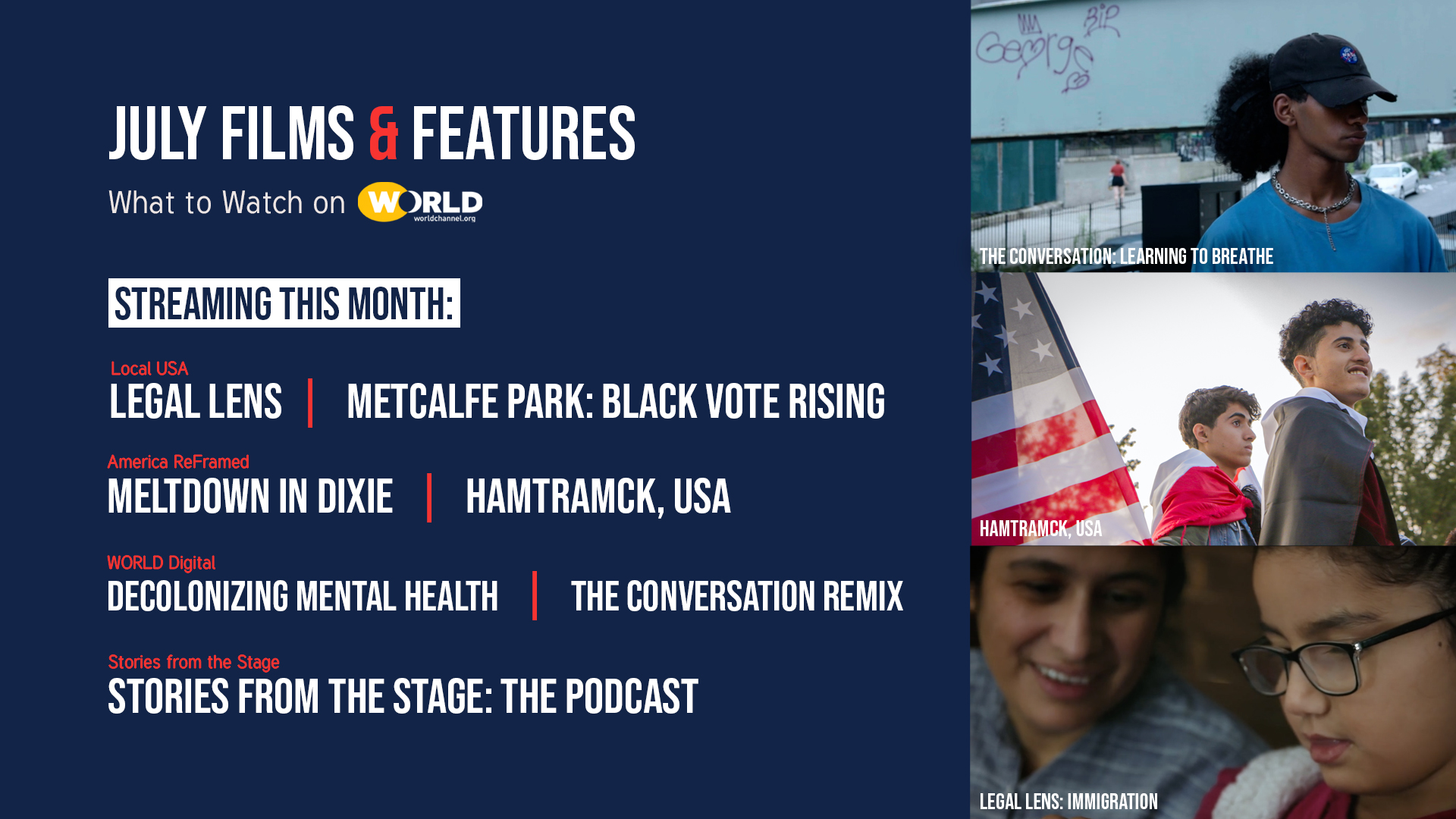 Films that explore the state of democracy in America.

Over the last year, discussions of race and equity in America have driven conversations of social justice, power imbalance, and equality to the front of the political roundtable. As individuals and leaders across the country alike continue to initiate change in their local communities, how has American democracy been impacted?

This month, watch films that explore the various states of democracy across the country. From Chicago’s South Side to Orangeburg, South Carolina, one thing is clear: Your vote matters.

As part of PBS's Mysteries of Mental Illness, examine the obstacles that systemic inequality imparts on the mental health industry, preventing BIPOC and other marginalized communities from receiving appropriate treatment.

As you prepare for your summertime adventure, pack the podcast that will guide and inspire you through road trips, family reunions and backyard barbecues. Listen to memorable stories and, in some cases, the ‘next chapter’ – what happened after storytellers exited the stage.

Twelve Harvard Law students from six countries explore how laws and regulations can both disrupt lives and encourage constructive change. With intimate and powerful profiles of people – either caught in or helped by the levers of the law – five short films examine the jeopardy to people's homes and lives.

Learning to Breathe
The Conversation Remix | Watch on YouTube

In 2015, Black boys, teens and young men shared thoughts about race. Five years later, they return to compare/contrast how perspectives on race, justice, and social inequity & inequality have changed.

In Orangeburg, South Carolina, a battle erupts between the Sons of Confederate Veterans and an ice cream shop owner forced to fly the Confederate flag in his parking lot.

Examine the beauty and tensions of multiculturalism through the exploration of life and democracy of America's first Muslim-majority city, Hamtramck, Michigan.

Mother-daughter duo, Danell Cross and Melody McCurtis, organize their Black community of Metcalfe Park to prepare to vote in the 2020 presidential election and overcome its challenges.

Follow M.I.T. Media Lab computer scientist, Joy Buolamwini, along with data scientists, mathematicians, and watchdog groups from all over the world, as they fight to expose the discrimination within facial recognition algorithms now prevalent across all spheres of daily life.

75-year-old Charlie Hardy has no money or political experience. But none of that dissuades him from running for the U.S. Senate in Wyoming. Can he and his volunteers sustain their grassroots campaign to shake up the establishment?

Known as a "recruiter's paradise," Micronesia, a U.S. territory in the Pacific Ocean, contributes a disproportionate number of soldiers to the American armed forces who cannot receive benefits. Yet, scores of young men leave their families behind in pursuit of the American Dream.

On Chicago's South Side, one woman’s five-year struggle against displacement by a multi-billion-dollar freight company exposes a community’s strength and fragility.

Meet the Radical Monarchs, a group of young girls of color on the front lines of social justice. Set in Oakland, California, the film documents the journey of the group as they earn badges for completing units on such subjects as LGBTQ allyship, environmental preservation, and disability justice.

Every four years, the Navajo Nation elects its president, whom many consider the most powerful Native American. Moroni Benally, an LGBTQ candidate with radical ideas, soon discovers the dirt of politics and the unpredictability of voter’s choice.

Your vote counts every year. Change begins within every city and town across the nation and radiates upward. WORLD Channel explores theses issues – healthcare, economy, race, immigration, housing, climate change and more – told through the lens of politics and policy and the narrative of the American people.

June marks the celebration of PRIDE, a time to honor LGBTQIA+ trailblazers that represent owning your truth. During PRIDE Month, WORLD Channel shares stories of community leaders, friends, families and creators who take pride in themselves.

Eyes on the Prize

EYES ON THE PRIZE tells the definitive story of the civil rights era from the point of view of the ordinary men and women whose extraordinary actions launched a movement that changed the fabric of American life, and embodied a struggle whose reverberations continue to be felt today.