Stories of PRIDE & Visibility: What to Watch on WORLD in June 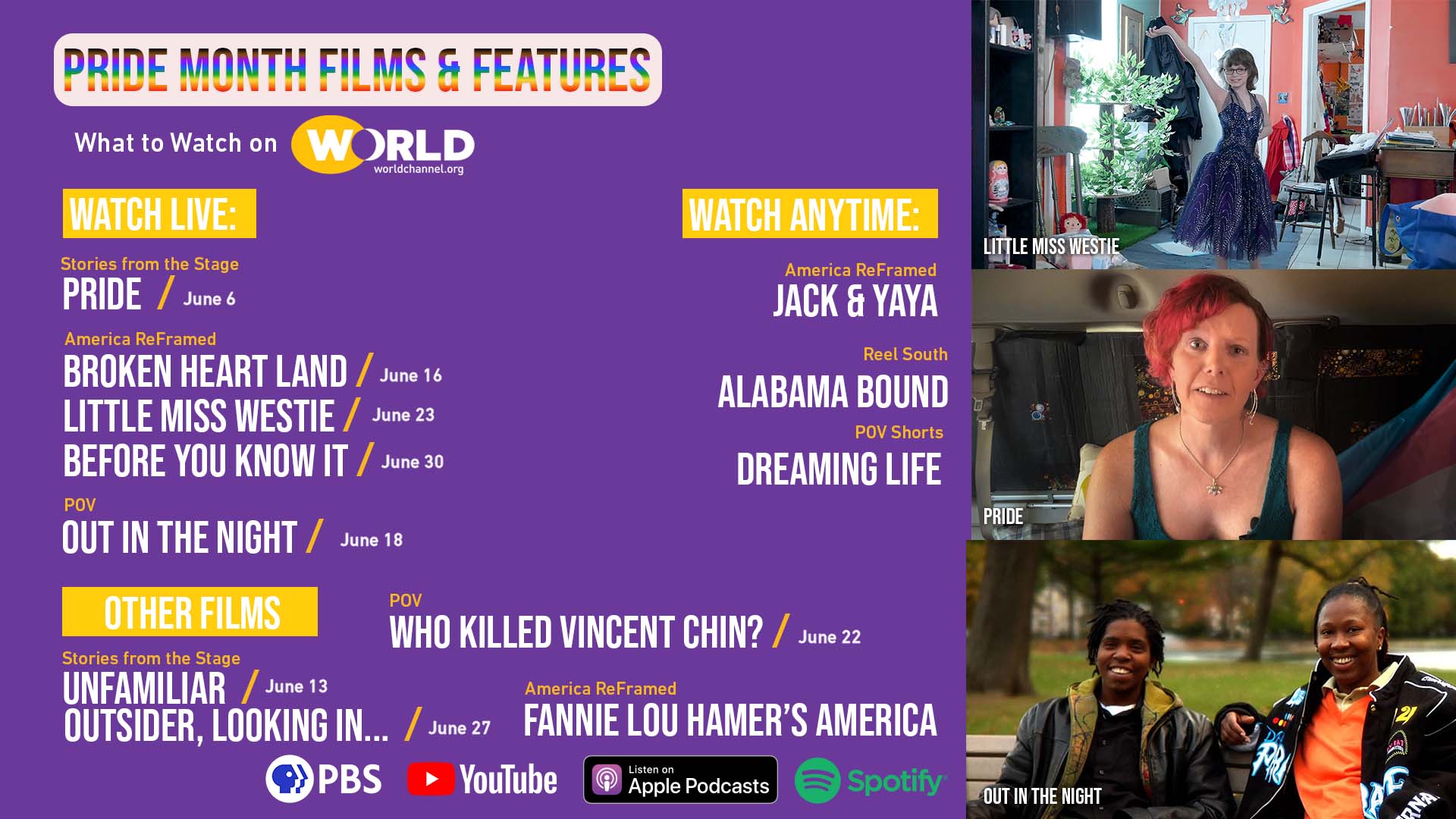 In June of 1969, members of the LGBTQIA+ community took to the streets of New York City for six days as a result of the police raid of Stonewall Inn, a gay club in Greenwich Village. Thirteen people were arrested, sparking dissent of continual police harassment and social discrimination in a city where same-sex relationships were illegal at the time. The protests motivated political activism for LGBTQIA+ rights and led to the founding of organizations like the Human Rights Campaign (HRC) and GLAAD.

For decades, the LGBTQIA+ community has been fighting to simply exist as their authentic selves. And while great progress has been made towards equality and representation, 2022 has been witness to state law-making that has or will strip basic rights like Florida’s “Parental Rights in Education” bill, dubbed the “Don’t Say Gay” bill. Further restrictions over discussion of gender identity and sexuality in schools, including book bans and anti-trans acts, are now moving swiftly through state legislatures. For transgender and nonbinary people, they must fight for visibility in social debates surrounding issues such as abortion and gender affirmation surgery.

Today, June marks the celebration of PRIDE, a time to be proud of one’s truest self. WORLD Channel honors the month, and LGBTQIA+ trailblazers and progressives, with films and specials that recognize what it means to own your identity, and find belonging in a community. ‘Jack & Yaya’ and ‘Little Miss Westie’ follow transgender best friends and siblings on their continuing journeys of self-expression; in ‘Prideland’, queer actor Dyllón Burnside explores how LGBTQIA+ Americans live proudly out in the modern South; and ‘Before You Know It’ introduces three pioneers of an "out" generation who have watched their community persevere through the decades, from the HIV/AIDS pandemic to gay marriage rights.

Also this month, watch new episodes of Stories from the Stage, where tellers take the stage to share stories of moving out of our comfort zones and finding a sense of belonging, and ‘Who Killed Vincent Chin?’, an Academy Award-nominated legacy title from POV’s archives that investigates the chilling 1982 hate crime.

Join the LGBTQIA+ community this PRIDE Month in rejecting injustices, raising awareness and encouraging inclusiveness for all.

PRIDE | Stories from the Stage

There are all sorts of things people can be proud of: a decision, an accomplishment or standing up and being true to who they are. Palestinian Muslim Eman finds the best tool to defy cultural stereotypes; April shares the relief & redemption of living an authentic self; and Jay comes out and receives surprising reactions. Hosted by Theresa Okokon.

On an autumn afternoon in Norman, Oklahoma, gay teen Zack Harrington killed himself with a gunshot to the head. Against the backdrop of a town bitterly divided on the issue of homosexuality, his parents, conservative Republicans and military veterans, are forced to reconcile their own social and political beliefs, eventually moving from private denial to public acceptance of their son’s legacy.

Out in the Night | POV

In New York City, a group of African-American lesbians were violently threatened by a man on the street. The women fought back and were later charged with gang assault and attempted murder. The film examines the sensational case and the women's uphill battle, revealing the role that race, gender identity and sexuality play in our criminal justice system.

A loving and insightful portrait of two transgender siblings – Luca and Ren – and their parents, set in the changing social climate following the 2016 presidential election. The film takes audiences behind the scenes as the family navigates puberty, school, dating and more as the children begin living in their authentic genders and Ren participates in the Lil’ Miss Westie Pageant.

Joe Papp, founder of The Public Theater, Free Shakespeare in the Park and producer of groundbreaking plays like "Hair," "A Chorus Line" and "for colored girls," created a 'theater of inclusion' based on the belief that great art is for everyone.

Follow queer actor Dyllón Burnside on a journey to discover how LGBTQ Americans are finding ways to live authentically and with pride in the modern South.

Before You Know It | America ReFramed

Dennis, Ty and Robert are pioneers in an "out" generation. They are also among the estimated 2.4 million LGBT Americans over the age of 55. The film celebrates the lives of active gay senior citizens who have witnessed unbelievable change in their lifetimes, from the Stonewall Riots to the HIV/AIDS pandemic and gay marriage rights.

Available on the PBS app

Louise Hay creates a space for healing as the AIDS epidemic takes hold in "Another Hayride"; a 19-year-old nonbinary trans boy is caught between his family's expectations and his dreams of living life happily ever after in "To the Future, With Love."

In the months leading up to the Supreme Court decision on marriage equality, gay families in Alabama were busy fighting discriminatory state laws. The film chronicles the roller coaster ride for gay rights in the South and a resilient community that lives with both frustration and hope in a place where the line between church and state is often blurred.

Available online & on the PBS app through June 21

From a young age, Yaya and Jack saw each other as they truly were, a girl and a boy, even though most of the world didn’t see them that way. As they grew older, they supported each other as they both came out as transgender. Follow these two friends for a year and explore their unique, 30-year relationship.

Get to know Gloria Allen, a 75-year-old Black trailblazing transgender activist who started a charm school for homeless trans youth and is now aging with joy and grace. It is the story of a mother’s love – the love that Gloria’s mother had for her and the love that Gloria has for her chosen children.

First Impressions | Stories from the Stage

Sometimes our first impressions are dead on. But snap judgments aren't always the best ones. As a teen, Sage stumbles on a boy in a chat room and travels to meet him; Dallas, a psychiatric nurse, faces her fear in an encounter with a neo-Nazi patient; and Kevin finds love by coincidence and a twist of fate. Hosted by Theresa Okokon.

In Living Memory | Asian American Stories of Resilience & Beyond
Available online, on YouTube & on the PBS app

Focusing on the closure of their mother’s nail salon at the onset of the COVID-19 pandemic, a queer filmmaker works to articulate the legacy of the salon for their refugee family.

OTHER FILMS THIS MONTH

June 2 on TV, online & on the PBS app through June 17 | Available on PBS Passport

With unparalleled access to a diverse cross section of politically engaged Chinese Americans, this film offers a character-driven verité look at Chinese American electoral organizing in North Carolina and Ohio. The film weaves their stories from the presidential election of 2016 to the 2018 midterms and explores the intersections between immigration, voting rights and racial justice.

NEW The Lookout | Asian American Stories of Resilience and Beyond

As a young refugee, Chanthon Bun joined a gang; he was convicted of second-degree robbery at 19 and lost legal protection to live in the U.S. After two decades in prison, Bun was released but not into the custody of ICE by a strange twist of luck. But he knows he must tread carefully as he attempts to legally reintegrate – if ICE were to locate him, he would be detained and slated for deportation.

The Hand That Feeds | America ReFramed

At a popular bakery café in Manhattan, patrons get served with a smile 24 hours a day. Behind the scenes, some of the undocumented immigrant workers earn far below the minimum wage. Filmed at the onset of the service economy wage wars, this is the story of the power struggle that turned a single city block into a battlefield.

NEW Unfamiliar | Stories from the Stage

At a time in our lives, we experience the unfamiliar. And this means stepping out of our comfort zones. Alexis tries to find her true self as a third-culture kid; in school, Linda's Jewish identity is put to the test; and when Shay is asked to share his coming-out story, he discovers that appearances can be deceiving. Hosted by Wes Hazard.

NEW Recording for Dodie | Asian American Stories of Resilience and Beyond

A Filipino-American daughter digitally records and visually captures the experience of being physically distanced from her sick father, who has been isolated in his nursing facility during the height of the global COVID-19 pandemic.

June 22 on TV | Available on the PBS app

On a hot summer night in Detroit in 1982, Ronald Ebens, an autoworker, killed Vincent Chin, a young Chinese American engineer, with a baseball bat. Although he confessed, he never spent a day in jail. This gripping Academy Award-nominated film relentlessly probes the implications of the murder, for the families of those involved, and for the American justice system.

NEW Outside, Looking In | Stories from the Stage

Most of us crave a sense of belonging and want nothing but to be accepted. Sean attempts salsa moves and finds himself in the center; Shivani creates a marshmallow structure and discovers her place in the world; and Ivy learns that some friendships have an expiration date...while others last forever. Hosted by Theresa Okokon.

A portrait of a civil rights activist and the injustices in America that made her work essential. Through public speeches, personal interviews and powerful songs of the fearless Mississippi sharecropper-turned-human-rights-activist, the film explores and celebrates the lesser-known life of one of the Civil Rights Movement’s greatest leaders.

Heaven: Can You Hear Me? | Local, USA

Available online, on YouTube & the PBS app through June 30

In Philadelphia, gun violence is the leading cause of death for young Black men. Exploring the impact on families through the eyes of mothers like one woman whose youngest of four sons was murdered, the film demonstrates the challenges gun violence prevention advocates confront while allowing viewers to understand the often-untold trauma and resilience of survivors.

June marks the celebration of PRIDE, a time to honor LGBTQIA+ trailblazers that represent owning your truth. During PRIDE Month, WORLD Channel shares stories of community leaders, friends, families and creators who take pride in themselves.

In celebration of Juneteenth, WORLD Channel invites you to stream films that champion Black stories, human rights and the continuing fight for equality.