The Power of One for All: Midterm Elections & Native American Heritage Month on WORLD 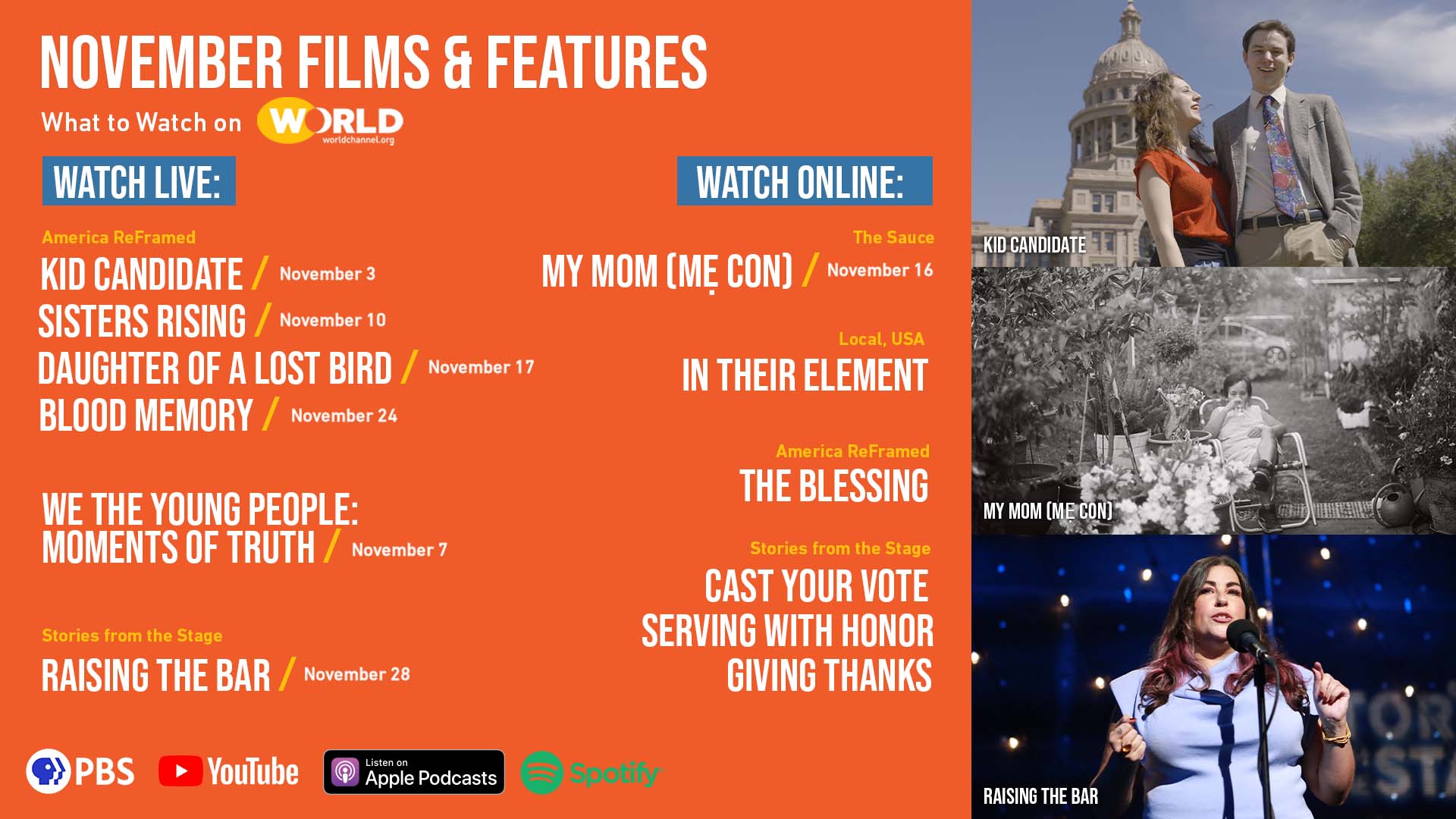 At times, it may be difficult to believe, but one person can change the world. In November, WORLD features new documentaries showcasing the tremendous work individuals do to contribute to the greater good, reaffirming how real change begins at home.

With the 2022 U.S. midterm elections taking place on November 8, young voters are thinking deeply about what they want their futures to look like. This month, watch films featuring people who have taken it upon themselves to be the change they wish to see. In America ReFramed’s Kid Candidate, what begins as a joke for 24-year-old Hayden Pedigo turns into an authentic campaign to reform Amarillo, Texas while mobilizing the city’s young residents; plus, a new special by PBS NewsHour’s Student Reporting Labs features newly eligible young voters sharing what will determine their turnout at the ballot box.

While Americans come together to create progress for the betterment of our nation, we also honor Indigenous peoples fighting for the survival of their homes and the prosperity of their people. From the damaging effects of climate change on Native lands to the high rate of sexual assault on reservations, our featured films for Native American Heritage Month tell stories of how the entire Indigenous community continues to work toward a brighter and safer future.

This month, watch how small developments can have big impact around the world.

NEW In Their Element | Local, USA
October 31 on TV, online, on YouTube & on the PBS app

Spotlighting Indigenous leaders rising up to meet the challenge of the climate crisis, the film features four communities across the United States, each working to protect a different natural resource: earth, air, fire and water. For people whose existence is inseparable from their native land, climate change is not a tale of the future – it is the present.

NEW Groundworks
November 2 on TV | Available on the PBS app

The story of the four California Native co-creators of the Groundworks project – an immersive, year-long media collaboration that culminated with a performance on Alcatraz Island on San Francisco's first official Indigenous Peoples Day in October 2018. While weaving together these artists' stories and their contemporary ways of sharing traditional knowledge, the film explores land management issues, water rights and food security – concerns for all Americans, especially in an age of climate change.

Native American women are 2.5 times more likely to experience sexual assault than all other American women, and 86% of the offenses are committed by non-Native men. SISTERS RISING follows six women who refuse to let this pattern of violence continue in the shadows. Their stories shine an unflinching light on righting injustice on both an individual and systemic level.

Daughter of a Lost Bird | America ReFramed
November 17 on TV, online & on the PBS app

Kendra, a Native adoptee, grew up assimilated in a loving, white family with little connection to her heritage. Now, as an adult with a family of her own, Kendra embarks on a seven year journey to find her biological mother, April, and return to her Lummi homeland. Together, Kendra and April, also a Native adoptee, navigate what it means to be Native and to belong to a tribe from the outside.

The untold story of the Muwekma Ohlone Tribe of the San Francisco Bay area. Decimated by Spanish colonizers in the late 1700s, an Ohlone village is rediscovered through cutting edge archeology, revealing surprising details about the life ways of pre-contact ancestors. Now, modern day members of the Muwekma Ohlone are honoring their past with these findings, laying claim to their existence, and paving the way for their future.

In 2010, Sinixt tribal member Rick Desautel was charged with hunting as a non-resident and without a proper permit in Canada. To the Sinixt people, hunting on ancestral land is an aboriginal right – a right that has been legally denied since 1956 when Canada unjustly declared them extinct.. Now, the nearly 3,000 Sinixt people on the Colville Indian Reservation in Washington State have a chance to not only bring light to their unjust extinction by the Canadian government, but also abolish the declaration completely.

For Sandy White Hawk, the story of America’s Indian Adoption Era is not one of saving children but of destroying families and tribes. As an adoption survivor, Sandy sets out to reclaim the missing pieces of her stolen past only to discover that her’s was not an isolated case. BLOOD MEMORY explores the communal healing that is sparked by the return of this stolen generation.

A Navajo coal miner, Lawrence, raises his secretive daughter as a single father, while struggling with his part in the irreversible destruction of his tribe’s sacred mountain. This deep spiritual sacrifice has caused him decades of emotional turmoil while providing for his family. Meanwhile, his daughter Caitlin searches for her inner identity amidst the expectations of her traditional father.

A viral joke video catapults Hayden Pedigo – a 24-year-old artist and musician in Amarillo, TX – into the spotlight and prompts him to make a surprise bid for city council. With his goal of upending the status quo and ousting corrupt incumbent politicians, KID CANDIDATE follows Pedigo’s unorthodox campaign while unpacking issues of race, income inequality and gentrification in small-town America.

NEW We the Young People: Moments of Truth
November 7 on TV | Available on YouTube Nov. 1

Meet some of the defiant Russians pushing back against President Vladimir Putin’s crackdown on critics of the war in Ukraine. FRONTLINE tells the inside stories of activists and journalists risking arrest and imprisonment to protest and speak out about the Kremlin’s war effort.

NEW Move Me | Independent Lens
November 9 on TV, online & on the PBS app

At 27, Kelsey Peterson dove into Lake Superior as a dancer and emerged paralyzed. But within the Spinal Cord Injury (SCI) community, she found allies in her quest to discover who she is now and to dance with disability. When a cutting-edge trial surfaces, it tests her expectations of a possible cure. She finds herself both scared it might not work—and scared that it might.

NEW my mom (mẹ con) | The Sauce
November 16 on YouTube

Would she smile, knowing the tender care my mother puts into growing bitter melons? Through an experimental lens, mẹ con intimately portrays the relationship between a Vietnamese woman, the plants she grows, and memories of her mother by exploring family archives and created memories within the garden.

Midwives chronicles two women who run a makeshift medical clinic in a region torn apart by violent ethnic divisions. Hla, the owner, is a Buddhist in western Myanmar, where the Rohingya, a Muslim minority, are persecuted and denied basic rights. Nyo Nyo is a Muslim and an apprentice. Encouraged and challenged by Hla, Nyo Nyo is determined to become a steady health care provider for her people.

NEW Raising the Bar | Stories from the Stage
November 28 on TV, online & on the PBS app

Raising the bar calls for a promise to not only improve but to keep that very word. When it includes setting a higher standard for yourself, the effect ripples to others. Samantha Lee helps her dance students feel less pressure by making a change; Vernon Payne discovers the reason why men want to do better by women; and Haley Hamilton finds compassion for bar patrons who spoil her day. Hosted by Wes Hazard.

Cast Your Vote | Stories from the Stage
November 7 on TV, online & on the Facebook, YouTube & PBS apps

On Election Day, things seldom go as planned. Voters and candidates face challenges that require creative thinking, integrity and courage. Donna discovers herself a foreigner in her own country; M.J. jumps into action when trouble strikes at her polling station; and Eric becomes a viable candidate when another drops out. Hosted by Wes Hazard.

This four-part documentary series traces the veteran experience across the arc of American history and explores the present-day divide between civilian and veteran communities. From the citizen-soldiers returning from the Revolution to today’s warrior class, it is a deeply moving story, illuminating the veteran experience and drawing civilian viewers into an unfamiliar culture.

Serving With Honor | Stories from the Stage
November 14 on TV, online & on the Facebook, YouTube & PBS apps

Service members and their families demonstrate their character and resolve in the most trying of circumstances. As a case manager working with refugees, former military Kevin challenges his assumptions about others; after penpalling her brother’s Navy buddies, Juli-anne understands the impact of her letters; and James tries to connect with his brother killed in the Vietnam War.

Favorite stories about Thanksgiving, the holiday that has us giving thanks. Lani's cooking mistake becomes a family secret; Melanée tests her adulthood through the ultimate challenge: the Thanksgiving turkey; and Matthew gathers his courage to stand up to his girlfriend’s tough as nails dad.

On Nov. 9, the Supreme Court heard arguments in a case that directly challenged the Indian Child Welfare Act of 1978. This month, during Native American Heritage Month, watch films that tell of the long-standing effects of U.S. policy and non-Native adoption, and what healing and cultural reconciliation mean to these communities.

WORLD Channel presents films rich with voices from the Indigenous community. With the leadership of our partner Vision Maker Media, we invite you to listen and learn from these Native storytellers.

Your vote counts every year. Change begins within every city and town across the nation and radiates upward. WORLD Channel explores theses issues – healthcare, economy, race, immigration, housing, climate change and more – told through the lens of politics and policy and the narrative of the American people.

Explore the coverage and context of change.

Explore how teens in America are seeking a new normal and redefining school life.

As we honor the 19 million veterans across the country this Veterans Day, explore the experiences of over 50 service members who have shared their stories with PBS' 'American Veteran.'

WORLD Channel spotlights stories of climate change and environmental conservation from Southeast Louisiana to Aotearoa, New Zealand to the Arctic Circle. What action can you make today to create positive change for your community and the planet as a whole?