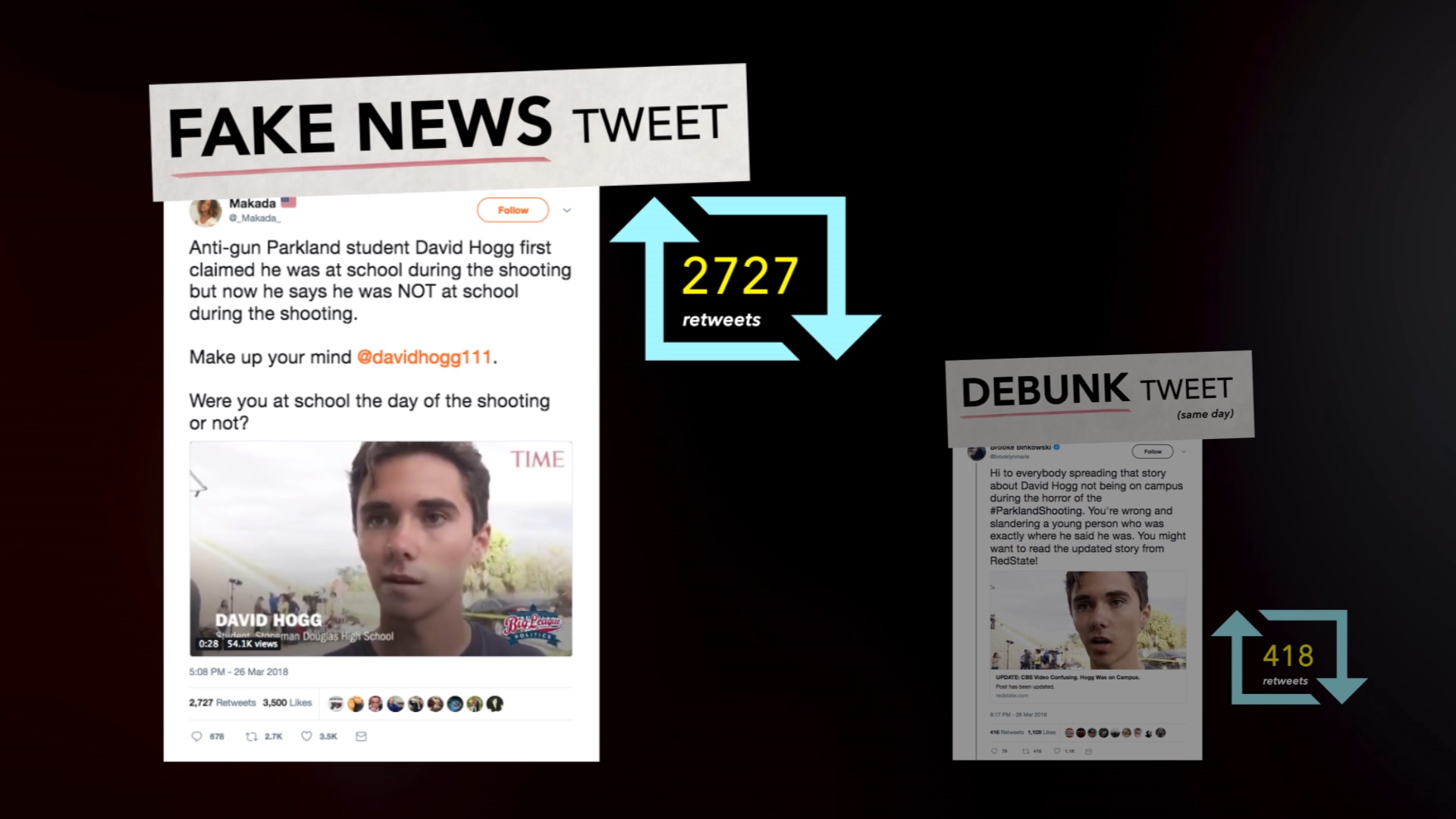 Conspiracy theories are everywhere - and in the age of social media, they’re hard to escape. But why do they flourish so easily, even when we have so much information at our fingertips? According to PULLING THE THREAD, a new digital series on WORLD Channel, our brains have a lot to do with it.

“The capacity of the human brain to be irrational is really remarkable,” said Pulling The Thread filmmaker Kristin Pichaske about conspiracy theories. The six-part series dives into cognitive psychology to understand why we’re so susceptible to misinformation. “The goal of the series is really to help us all think about how we think. And how can we, by understanding how our brains work, hope to be a little more rational and more accurate in terms of what we think, what information we take in, and, maybe most importantly, what sorts of media we share online.”

“What we're faced with is noise,” Pulling the Thread filmmaker Danny Alpert explained to us. “I hope that the tools - the ways that we expose how people think and what gets them trapped in the noise - will allow people to lower the volume; to find accurate information and engage in honest and open conversations.”

Here are five reasons conspiracy theories thrive online, according to Pulling The Thread:

1. The “Illusion of Understanding” makes us think we’re experts when we’re not.

According to psychologists, it’s a perfectly human tendency to assume expertise in a subject even if - especially if - we don’t have the actual knowledge to back it up.

“The people who most overestimate themselves are the people who know the least,” Bryan Caplan, author of The Myth of the Rational Voter: Why Democracies Choose Bad Policies, says in the film.

It’s the classic conundrum that we just don’t know what we don’t know. And online, where anyone can establish themselves as a mouthpiece for anything simply by clicking “publish,” that Illusion of Understanding can be taken for actual mastery over a subject.

2. Our brains naturally seek to fill gaps in understanding with whatever information is available, even if it’s not accurate.

Following the September 11, 2001 terrorist attacks on the World Trade Center in New York City, conspiracy theories took off on the internet. According to Pulling the Thread, the fact that so many American lives were lost at the hands of a small group of radicals that most people had never heard of was just too much for many people to comprehend; there had to be another explanation. This is known as “proportionality bias,” a common theme in conspiracy thinking, in which it is assumed that the magnitude of the cause of an event must match that of the event itself.

And what better place for “a growing army of amateur sleuths” to connect and share their theories with one another than online? According to the film, a glut of information only adds to the noise, so as people were inundated with news reports as well as alternate theories about the 9/11 attacks, they turned their trust inward - to themselves, and their Google searches - rather than trust any external sources, however factual.

3. Anyone can publish online.

In a phenomenon known as The Dunning-Kruger Effect (so named after the scientists who first studied it), novices tend to overestimate their own knowledge while experts actually underestimate their expertise. We think we know a lot about a complex subject, but then the more we learn about it, the more we understand how complex it actually is, and how much we don’t know.

“When it was one-way mediums - when it was television, it was newspapers - there was some sort of fact-checking involved. If it didn’t have some grounds in truth, there was consequences for it. But now it’s just random shouting,” says Ben Collins, NBC News journalist, in the film.

True experts in a subject area, like investigative reporters who follow one story for years, even decades, have to establish themselves as vetted sources of information before even being hired by a trusted news outlet. And even then, their work is still scrutinized by editors, editorial boards, other journalists, and watchful readers. Your uncle and his Facebook page, on the other hand, are not monitored by the same gatekeepers for the truth.

Search engines like Google and Bing are designed to surface the content that we like, not what is true. These engines reward popular content by featuring it higher up on the page after you search for a term, instead of serving up only information from vetted sources like news outlets, libraries, and academic journals.

“True things, people seem to be not so interested in. It’s outrageous or bizarre forms of events that tend to catch people’s attention, and those tend to be fabricated,” David Mikkelson, founder and CEO of snopes.com, one of the original internet fact-checking websites, says in the film.

5. Nobody wants to be told that they’re wrong - especially not publicly.

Data shows time and again that even when a fact-check is published to correct an erroneous post, once the initial post takes off online there’s just no stopping it. The original publisher doesn’t want to be exposed as being wrong, but also anyone who shared that post - and is therefore implicit in the spread of misinformation - doesn’t want to admit their wrongdoing, either. And according to the experts on Pulling the Thread, they may not even think they’re wrong in the first place.

“The idea that you’re going to change somebody’s mind with one debunk or one fact-check is almost entirely wrong,” Claire Wardle, director of First Draft News, says in the film. “Our brains are structured in such a way that it’s very difficult for us to have our minds changed.”

“All of these tools that help you find the truth are only going to be effective in so far as we actually want the truth,” noted filmmaker Pichaske. “There is a lot of evidence out there that most of us really aren't truth-seeking beings by nature. We're much more motivated to believe things that are socially advantageous for us because that's what our group believes.”

Curious about how your own brain works in regard to conspiracy theories? Use the Discussion and Activity Guide to explore for yourself, and watch the whole series on worldchannel.org and on YouTube.

Ellen London is a Senior Editor at WGBH.org.